College has kept me busy since September but with my first piece of artwork of the academic year complete it felt like time to share it.

We were given the theme of 'Abstraction' as a starting point and one month to explore possibilities and produce a finished piece. Abstraction in its purest form has never been something that has sat comfortably with me. I've never quite understood it. Pattern and geometry yes, but entirely none figurative mark making no. I think it's something about letting go, removing any initial idea of how something should look that has scared me away in the past. I visualise things, carry them around in my head for months sometimes before I commit to  paper. To start with nothing but possibility and paint takes some getting used to.

But I've been reading Anna Moszynska's book on the subject and that, along with Louise Fletcher's weekly newsletters, has helped me find a way through. 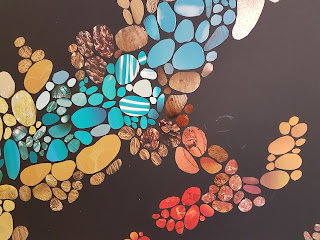 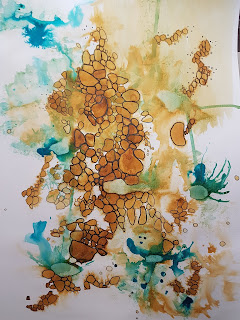 I played with collage, splashed some ink around. Yet, I still found myself needing a focus, a purpose to what I was doing. During my research I stumbled upon images that showed the inside of trees and plants in microscopic detail. The phloem and xylem, the 'veins' of the trees, the surrounding bark, the internal heartwood, and saw that my subconscious had drawn me to those patterns of cells.

Trees have been on my mind a lot lately. Since our UK lockdown began back in March I've watched with horror as HS2 workers have destroyed the countryside in the name of 'progress', taking the trees and wildlife with it. It has filled me with rage and sorrow in equal measure. And so, the idea of 'Heartwood Divided' began to take shape.

Rather than paint my own representations of these natural patterns, I turned to textiles and began stitching pieces for two 45x63cm canvases. 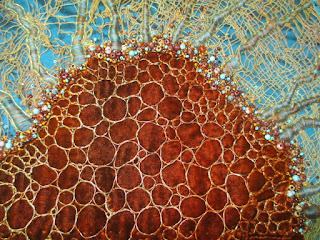 It was slow, peaceful work. The rhythm of the needle passing back and forth through cloth had a calming effect that belies the anger I was holding inside. That anger hasn't left me but focusing on the work at least let my mind rest from it for a little while. 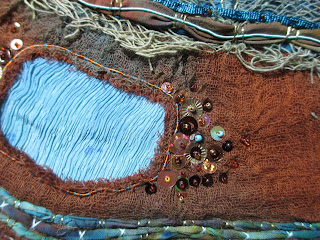 I've moved on to new research these past few weeks, looking at artists who use digital technologies in their work and finding that there are some truly incredible minds out there turning unlikely technology into amazing art. So here are the two completed canvases. They are imagined as a diptych, to be displayed together but apart, their heartwood divided. 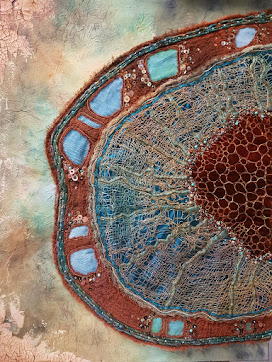 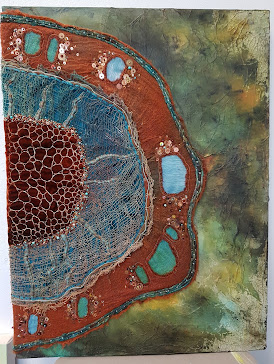 This too shall pass... 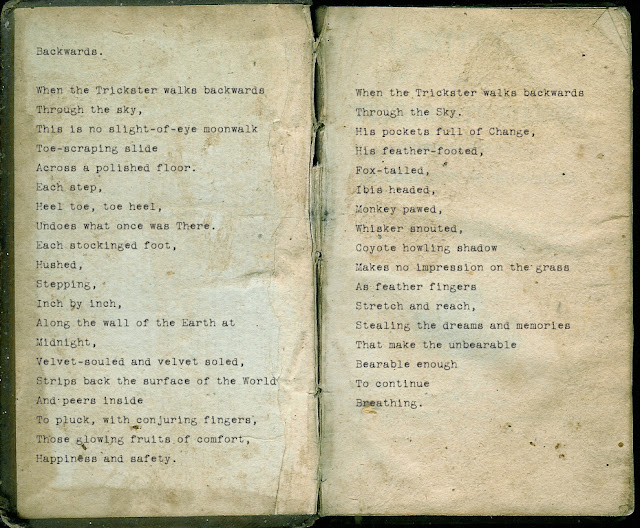 This week I had to say goodbye to a place that has meant a lot to me. It was the place where I met my husband 30+ years ago, where I read Chaucer and King Lear for the first time, where I celebrated manically with a friend when we managed to get David Bowie tickets, where I put together the portfolio that got me into art college and where I returned to in 2018 to do the Fine Art course that has had the biggest impact on my life.

The Queen Alexandra campus is closing, and while my course continues on another site, I'm going to miss my little studio corner so much.


And I'm going to miss all the students who started this journey at the same time as me. They have all completed a Foundation Degree rather than the HNC/D I'm taking so are moving on to University to do their BAs.
But most of all I'm going to miss my tutor, who is leaving to work on his own art full time - something I think anyone who loves to make art always dreams of doing. He has been brilliant from the start. I couldn't have wished for better. Check out his work here:  https://www.johnorourkeart.com/
So with all this change - I'm not good with change - I've been floundering, not painting, not focused, constantly just moving things around while my brain tried to figure it all out. I've read poetry and prose from Hedgespoken revelling in the wordsmithery of Tom Hirons, Terri Windling and Jay Griffiths, built a shed, painted a shed and slept a lot.

Slowly emerging from this gloom, I'm hearing whispers of new ideas so in the Midnight quiet of hedgehog time, fox time, owl time I'm going to let those whispers lead me into the dark woods.
at July 04, 2020 No comments:

The Tale of the Hare and the Un-referenced Source Materials Pt. 3

Douglas Adams once said "Time is an illusion, lunchtimes doubly so" and it seems to have been drifting like a slow moving river through May. The warm sunny days were only ever meant for wandering through woods, listening to bird song and watching seas of cow parsley nod in the breeze.

Then I looked up and June had arrived! Down came the rain so I set myself a challenge as part of the Wildlife Trusts' #30DaysWild to complete a small wildlife painting a day throughout June. It's the nineteenth as I write this and I'm only 2 days behind which is not bad going for me. But in the midst of all that I forget again about the Hare book which I'd finished in May in an epic late night session in the shed under the glow of my fabulous solar power lights.

I'll keep the wildlife paintings for another time but here is the completed book from cover to cover. Even though I wrote the words for this over a year ago, it seems right that I completed it during this time of lockdown when so many people have begun to slow down and take the time to appreciate Nature, to hear the Hare's song and connect with the world around them again. Long may it continue. It's also fitting that I should post this project this week, the week in which wildlife campaigners won a great victory in Scotland that will finally see their mountain hares given protected status and the mass killings around the grouse moors will finally stop.

So there is photographic proof that I can have an idea that's not a college assignment, collect all the stuff I need to realise it, file it away for a year but then, crucially, actually finish it....I surprised myself if I'm honest. It must be all this cleaner air...

The tale of the Hare and the Un-referenced Source Materials pt. 2

It's been another strange couple of weeks. Distractions, day to day tasks like shopping now taking half a day, endless wrestling with myself in my head about what direction my art is going in and now, colder weather again, has meant I haven't done much more work on my little book.

But I forgot I hadn't posted all the pages I've completed so here are three more....


So I'm about half way through now, just waiting for the sun to warm the shed again - a girl can't work with cold hands.

The Tale of the Hare and the Unreferenced Source Materials

When I'm working on an assignment for college I always end up with a collection of stuff that doesn't get used - little sketches, lino and gelli-plate prints that didn't quite work, collected ephemera, scraps of paper and fabric too nice to throw away - and sometimes this includes short phrases and sentences that come to me while I'm working.

When I finished one project last year, on the theme of the Hare, I put all this stuff to one side with the idea of one day using it all to make a book and this has now become the first project I'm working on in my little shed.

I've been aiming at completing a double page spread each day, spending a couple of hours each afternoon - when it's nice and warm in the shed - to experiment with page layouts and get everything glued in place to be left overnight to dry out.


The pages are all re-purposed packaging - those cardboard envelopes you get from mail order companies. I've saved a box full of them over the last few years. And they are designed in a concertina so that the pages can be displayed individually or all together. I'll add the covers at the end.
at April 28, 2020 No comments:

The Shed at the End of the Yard

With the dining room overwhelmed with art materials, last Summer I spent some time converting our little 7'x5' shed into a work space. There was a massive sort out, tidy out, give stuff away day followed by painting the walls white, adding flooring and carpet (thanks Mam), a table (thanks Lorna) and bookcases and shelving scrounged from all over the place. I bought two solar powered lights, a big clock and a wind-up radio, everything else was second-hand, re-purposed, given or found. 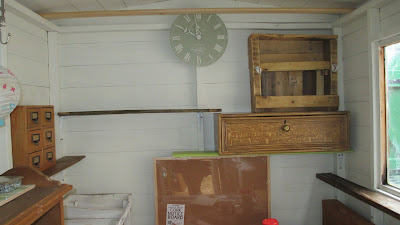 It took a day to carry all the books and art materials from their former home and arrange them in new spaces. Longer still to rearrange them all again, until finally I was happy and could begin making a mess. 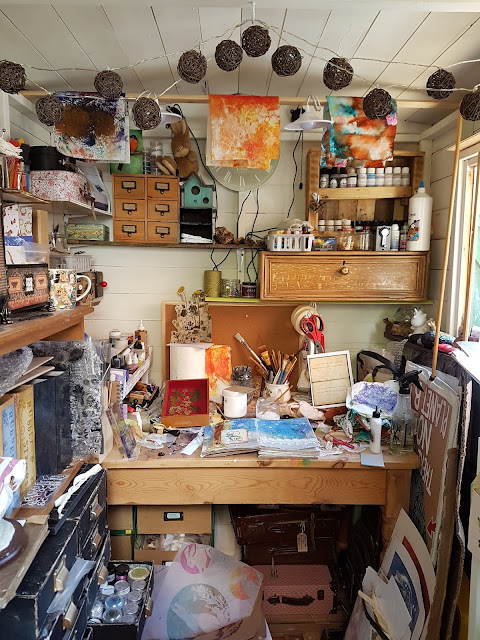 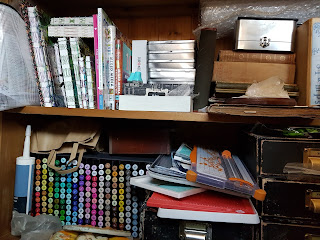 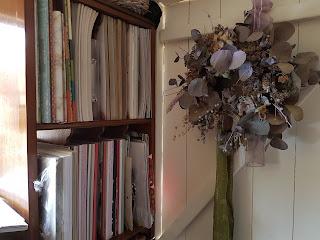 It's a tiny space, too cold to work in Winter but now warmer days are here I work on secret projects, messy projects and things involving glue, while the cats snooze on the roof.

Life has slowed right down. I hadn't realised just how much I needed a break from life until everything stopped. So I draw and paint and stick and stitch, listening to the goldfinch singing in the tree across the lane and make the most of this gift of time, this Pause, to take deep breaths of cleaner air and quieter skies in the shed at the end of the yard.

Day eleven of the UK lockdown and, like many other people, I'm getting around to doing stuff that keeps getting pushed to the bottom of the 'to do' list, like changing my online accounts to my married name. And setting up this new blog to reflect the changes in my artwork over the last couple of years. The Wild Wood is ...not gone exactly...I still visit and walk through the tangled roots and branches... but I'm on another adventure now, working towards (hopefully) a degree in Fine Art.

So here is where I'll be writing about what I'm doing, painting, drawing, creating. Right now I'm playing with digital media, painting tests pieces for a six foot square canvas that's currently locked in the studio at college waiting for us humans to emerge from the virus crisis, and making a fabric crow - just for the hell of it.

No images of this to share right now so here's a photo of Darwin snoozing in a suitcase :) 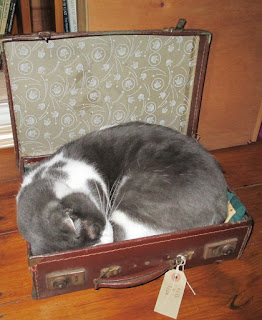 Shona Fraser
I am an artist working in the UK. Inspired by the natural world and the green spaces near where I live, my art is about celebrating and connecting with the landscape, its mythologies and its wildlife. As a member of several environmental campaign groups, I feel that a vital way of helping to preserve that natural world is to encourage people to engage with it. I hope that my art may, in a small way, help to do this. I prefer to explore my subjects across a range of media, using drawing, painting, mixed media, textiles, print-making and sculpture to create a wide variety of artworks on a given theme. I am currently studying towards a Fine Art degree via a diploma course at Queen Alexandra College.